Home » Chemistry » Breaking Down the Dioxins Pathway to Exposure
Chemistry

Breaking Down the Dioxins Pathway to Exposure

Toxic chemical compounds called dioxins have been the subject of concern in two media stories recently. In one instance, residents of Saginaw, Michigan are battling Dow Chemical Company over dioxin pollution that began in the 1980s. The issue was brought to light in 2002 when environmental regulators in Michigan reported on the effects of dioxin contamination on the soil along the river. Over 40 residents have brought charges against the chemical giant. Since the lawsuit began nearly fifteen years ago, Dow has removed portions of sediment deemed contaminated and pledged to reduce contamination in the future.

Dioxins have also been the subject of another issue gaining traction in the media: a push for transparency of the ingredients used in tampons. Tampons are classified as medical devices, so manufacturers are not required by law to disclose their ingredients. However, a recent study concluded that dioxins may be present in feminine hygiene products, taking into account that they are known byproducts of rayon, a synthetic fiber typically used in tampons.

As conflicting arguments are made on both sides of these unrelated stories, one undisputed truth is evident: dioxins are firmly rooted in the earth around us and have the potential to make their way into nearly anything in our environment or on the shelves at our stores. As demonstrated in the media, the general population’s concern over exposure ranges from environmental sources, such as soil and groundwater, to feminine hygiene products. And though it was not the source in the two mentioned cases, it should come as no surprise that the world’s food supply is by far the number one route of exposure for humans.

Various scientific and government groups are making strides to reduce dioxin production and clean up existing dioxin contamination. Nonetheless, consumers and businesses alike should understand how these harmful chemicals come into existence and how humans are most likely to be exposed to them. Awareness and education are the first steps in eliminating dioxins as major persistent organic pollutants of concern.

Read our latest infographic below to follow the dioxin pathway to human exposure: 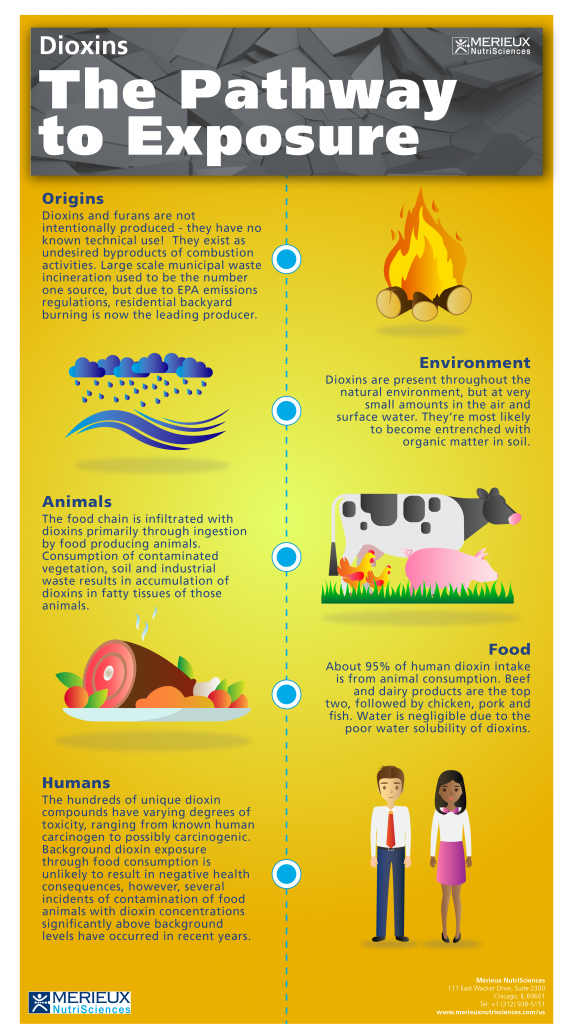 Could these dangerous compounds infiltrate your food products? Mérieux NutriSciences’ Dioxin Center of Excellence laboratory is opening this summer in Crete, IL, allowing us the ability to assist the food industry in ensuring adequate monitoring of dioxins. We offer dioxin, furan, and polychlorinated biphenyl (PCB) analytical testing for ingredient suppliers, manufacturers and retailers to verify the safety of their products. If dioxins are a risk in your supply chain, contact us today!

Nick Price is a Product Manager for Analytical Services at MerieuxNutriSciences. His current focus is on contaminants. Nick received a Bachelors degree in Chemistry from the University of Illinois and is currently pursuing an advanced degree in Food Science. In his free time he enjoys playing golf, spending time with his two dogs, and volunteering on behalf of Autism Speaks.