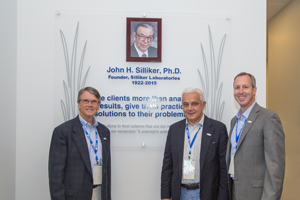 Mérieux NutriSciences renamed its North American flagship laboratory in Crete, IL, the Dr. John H. Silliker Solution Center in honor of the late founder of Silliker Laboratories. The special rededication was held on the opening day of 2015 Institute of Food Technologists (IFT) Annual Meeting and Food Expo. Mérieux NutriSciences acquired Silliker Laboratories in 1997. Dr. Silliker, 92, died in March of this year following a lifetime of distinguished service to food science.

Jim Miller, North America President of Mérieux NutriSciences, welcomed over 80 invited guests to a champagne brunch at the 71,000 square foot laboratory, the largest facility in North America dedicated solely to food testing. Miller marveled at how Dr. Silliker, despite being retired for several years, could mesmerize a room during appearances at organizational functions. “The respect, admiration and affection for him was palatable because we all knew his amazing story,” Miller stated.

In 1967, Dr. Silliker opened his first laboratory in Chicago Heights, IL, and guided its growth into the largest independent food testing and consulting network in North America.

Praising his visionary spirit, Philippe Sans, Chief Executive Officer and President of Mérieux NutriSciences, said Dr. Silliker made numerous important scientific contributions to the detection of harmful foodborne pathogens, particularly Salmonella. “While we are here today for this most deserving tribute to Dr. Silliker, we may never adequately honor his accomplishments and contributions”, Sans noted. “I am proud to serve as CEO of the organization that was created 48 years ago by Dr. John H. Silliker.”

Russell S. Flowers, President and Chief Scientific Officer (Emeritus) of Mérieux NutriSciences, spoke on a personal and professional relationship with Dr. Silliker that spanned 40 years. “By the time I joined Silliker, he was heavily involved in a number of highly influential organizations, such as the International Commission on the Microbiological Specification for Foods (ICMSF).” Through his work with ICMSF and other groups, Flowers said Dr. Silliker put the laboratory on the international map. “He was a great scientist with a vision,” he stated.

During the rededication, a large mural was unveiled in the Crete laboratory lobby. Bearing a picture of Dr. Silliker, it is emblazoned with his most defining quote, still extremely accurate and adequate nowadays: “Give clients more than analytical results, give them practical solutions to their problems.